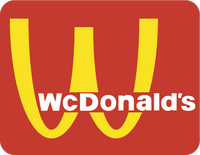 WcDonald's, WcDonald, or WacDonald's (ワクドナルド) is a fast food restaurant chain used in many different anime and webtoons and is based on the real-life McDonald's. The name is mostly used to avoid the McDonald's trademark. The various anime that feature WcDonald's have no connections.

On April 27th 2016, Kings Day, the Dutch King visited the Dutch town Zwolle. Mcdonald's inverted its trademark golden arch into a "W" at some local branches, since his name is "Willem-Alexander".

In March 2018 the popular fast food chain inverted its trademark golden arch into a "W" in some California branches in support of International Women's Day which is also in line with the "Me Too" movement.

Ano Hana The Flower We Saw That Day

No Matter How I Look at It, It's You Guys' Fault I'm Not Popular!