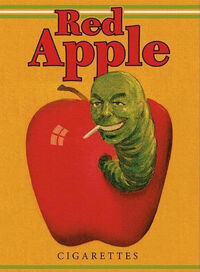 The logo features a green worm with a handsome anthropomorphic male face crawling out of a wholesome-looking red apple. This implies the apple may look healthy but is rotten on the inside - a metaphor for lung cancer. The product is advertised widely in Tarantino's movies, implying that people in his movies are probably more risk-taking and nihilistic than in ours.

The brand is mentioned by name in dialog in From Dusk Till Dawn and Pulp Fiction.

Butch Coolidge buys a pack of Red Apple cigarettes at the bar from the bartender.

There are Red Apple billboards at the Tokyo airport that show Julie Dreyfus (who plays Sophie Fatale in the movie) modelling the product. This was a reference to Dreyfus' modelling work in Japan.

A mural for Red Apple Cigarettes is painted on a wall behind the characters in a scene. The artwork is different, with the worm depicted wrapped around the pack, wearing sunglasses and not smoking a cigarette. This was an Easter Egg referencing Tarantino, who was dating Mira Sorvino at the time.

A gas station sells the brand.

Bob mentions that Minnie rolls her own Red Apple cigarettes as an answer to Major Marquis Warren question if "She's still stinking up the place with Old Quail pipe tobacco?". This scene takes place at the stables of the Haberdashery.

Additionally, In the scene where Bob watches the chess match, he say's he'll be enjoying his “Manzana Roja” which is Spanish for Red Apple.

Once Upon A Time In Hollywood[]

Red Apple ad from the Once Upon a Time In Hollywood website.