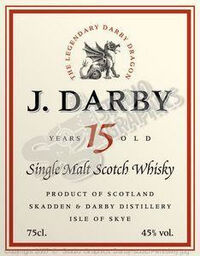 A Darby man never says when.

J. Darby is a brand of Scotch whiskey made by Independent Studio Services featured in various TV series such as Ray Donovan, Black Jesus, Community, Goliath and Lost. The whiskey is distilled at Skadden & Darby Distillery on the Isle of Skye in Scotland.

At the Ewing family reunion, JR is seen drinking shots from a bottle of J. Darby bourbon (at around the 32:00 mark)

J. Darby Bottle can be found behind the bar while Michael and Deangeleo talk.

Daphne finds a bottle of J Darby Bourbon Whiskey in her grandfather's room.

Avery pours a glass of J Darby Whiskey for Alannah.

Lloyd becomes the spokesperson and promotional talent for J. Darby.

Wade and Lemon are drinking the J. Darby because he's disappointed about the break up with Vivian.

Hickey pulls a bottle from his desk drawer to share with Abed.

Jeff is seen drinking this whiskey multiple times in this episode.

On the table during the press conference.

Jeff and Professor DeSalvo are seen drinking this several times in this episode.

In Annie, Abed and Britta's apartment.

Ed and Mike drink the whiskey by the fire.

Sawyer and Kate played a game of "I never" with 2 bottles of spirits Sawyer stole from the plane wreckage. One of these bottles was of J. Darby whiskey.

Desmond drank a bottle of J. Darby bourbon whiskey as he contemplated suicide in the hatch.

Captain Tidwell pours his whiskey in the kitchen drain.

Fornell has J. Darby in his cupholder when he is pulled over for drunk driving.

Ray brings a bottle of J. Darby when Terry is released from prison.

Abby is drinking from a bottle of J. Darby at home at the end of the episode.

Rebekah Mikaelson drinks a bottle of this at the bar of the Mystic Grill with Stefan and Damon Salvatore.

Katherine Pierce steals a bottle of J. Darby from behind the bar of the Mystic Grill and proposes drinking it with Stefan Salvatore.

There is a bottle sitting on the bar while Julian is threatening to kill Damon with a broken pool cue.

(S03E14) "Parents Ancestry Coupon Chaperone" . Jen is adding J.Darby to her coffee out of frustration in talking to her parents.

11.05 Lucifer and Amatiel share a bottle of J. Darby at the bar.

50.11 Mazikeen drinks straight from J. Darby's bottle at the bar, while conversing with Mikael.

Jen and Judy were sitting by the pool sharing a bottle of J. Darby 15 year old scotch.

Jen and Judy are talking in Jen's kitchen and a bottle of J. Darby is sitting on the counter next to them.

In private club whisky room there is 25 year's old wooden box with money.

How to get away with murder, season 6
Community content is available under CC-BY-SA unless otherwise noted.
Advertisement