Edit
watch 01:36
We're Getting Mutants in the MCU - The Loop
Do you like this video?
Play Sound
Glencallan 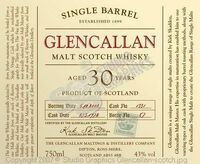 Glencallan or GlenCallan is a brand of Scotch whisky created by Independent Studio Services as a prop for several TV shows, such as Bones, Community, Grey's Anatomy, Hart of Dixie, Nip/Tuck, The Shield, and "Zoo". The name is possibly an amalgam of "Glenlivet" and "Macallan," two popular real world brands of scotch.

‘Scandal’ Season 7 episodes 6, at the end of the episode Olivia Pope pours herself a drink of Glencallan at the hidden B-613 headquarters in the White House.

May and Ward are drinking Glencallan together on The Bus.

Calvin and Pony Joe are drinking a 30 year Glencallan at the bar.

Elliott Anderson hid a bottle of Glencallan under the sink.

At the end of the episode Sgt. Voight opens a gift containing a bottle of Glencallan.

Animated version seen empty on Winger's office while panning across his desk.

Seen during the Karate Kid play

Nip/Tuck - S04E09, Christian Troy has Glencallan 21 which is revealed to be an Islay scotch.

They serve Glencallan at the bar.

Peter grabs a bottle of Glencallan, but gets a coffee instead.

Stolen cases of Glencallan are found in the back of a car.

The Office - "Shareholder meeting" (S06E11) When they drive away from the meeting Michael stole a bottle of Glencallan(20:10).[] 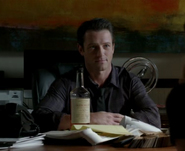 Sons of Anarchy
Community content is available under CC-BY-SA unless otherwise noted.
Advertisement