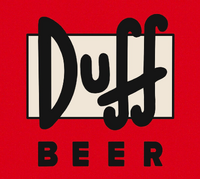 Can't get enough of that wonderful Duff!

Duff Beer is Homer Simpson's favorite brand of beer in The Simpsons. The brand has its own mascot, Duffman. Fudd Beer is the main competitor of Duff Beer.

Retrieved from "https://fictionalcompanies.fandom.com/wiki/Duff_Beer?oldid=15296"
Community content is available under CC-BY-SA unless otherwise noted.