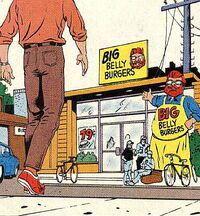 Big Belly Burger or Big Belly Burgers is a fast food restaurant chain featured in the DC comics, Arrow TV series and Batman: Arkham Origins. The chain is a subsidiary of LexCorp in the comics and a rival of O'Shaughnessy's.

Big Belly Burger's very first appearance was in Adventures of Superman #441 from June 1988.

John brought Oliver and Tommy to a Big Belly Burger restaurant after they were beat up by Max Fuller's henchmen. John later came here for a meal, and for a chat with his sister-in-law, Carly, who was a waitress there. Oliver has also taken his younger sister Thea and his mother Moira there. Thea has even taken Roy Harper to eat there.

There are billboards throughout the city advertising the restaurant. There are also discarded burger wrappers and drinks in the Gotham City Police Department.

Following his training to run faster, Barry Allen ate a massive pile of burgers from the restaurant

Pile of Big Belly Burger packaging in The Flash.
Community content is available under CC-BY-SA unless otherwise noted.